So you want to make watermelon juice... 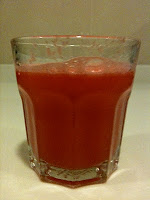 I've discovered while living in Shanghai, that one of my favorite things is watermelon juice. Who knew?! I knew I loved eating watermelon pieces at family BBQs in the summer, but this takes it to the next level. So after enjoying the watermelon juice at various restaurants I decided to buy a juicer thing and try my luck at making my own juice.
Lucky for me there's a little stand less than 15 feet away from my front door that sells only watermelons, so I didn't have to go far. In my limited Chinese I told the nice girl there that I wanted one large watermelon. I did this by saying (phonetically) "eee-ga" and then pointing at the watermelons and gesturing widely with my arms that is should be large. (Eee-ga means = one of. Ga is a counting term, just as a side note.) So the girl climbed around all the watermelons tapping them and finding me a nice big one that was ready to go. It was a little larger than a basketball.
I hauled the watermelon home, rinsed it off in the sink and got ready to begin cutting it up into chunks for the juicer. I meant to take a picture before I cut open the watermelon but forgot, so here is what the watermelon looked like after I sliced it open with a cleaver. 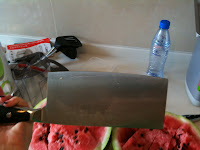 I didn't want to make a huge mess so I cut sections out of the watermelon as I went. Bob told me later I was silly, but really this made very little mess. I used a spoon to help get all the good stuff out. 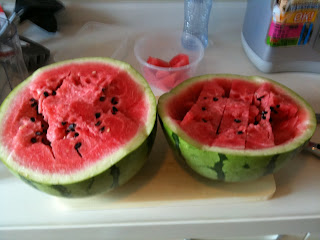 I put half the chunks in the freezer and the other half in the refrigerator. I put some in the freezer because bob and I thought that rather than using ice to make it super cold, we could just make the watermelon itself the ice. We felt pretty brilliant. Anyway, about four hours later (because i was cleaning) I decided it was time to use the juicer and make some fresh watermelon juice. 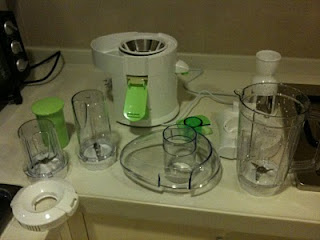 So our juicer is a quazi blender/juicer/food processor thing, and of course all the instructions came in Chinese. So I thought, "hmm, I can probably just use the blender for this." That was not the case. So i reassembled the food processor and made the biggest mess of my kitchen because I hadn't put everything together properly. But after reviewing the placement of the pieces on the food processor I was able to get everything worked out, and I made a giant pitcher or watermelon juice, and it was delish!
I've been trying to upload more pictures of my journey to make watermelon juice but my connection in Shanghai hates me. I'll likely add them to flickr later.
Now go forth and make watermelon juice, you'll love it!
:)M
at 8:20 PM