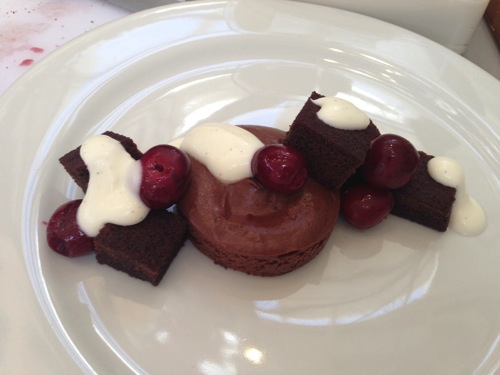 I recently took the Chocolate Class, taught by Bill Corbett the Executive Pastry Chef of the Absinthe Group, at SFCooking.  I mostly took the class because my friend Hazel was taking it as well and we like to cook together.  I was really surprised by how much I learned in this class because, while I had expected to have a good time and make delicious desserts, we measured everything in grams.  All the classes I've attended at SFCooking have been great, and I've learned a lot and had wonderful time cooking, but Bill's class put a whole new spin on everything.

Everyone in the chocolate class still had a good time, but you could tell that everyone was more focused on what they were doing because the recipes were so precise.  Most people don't realize that one cup of flour is not equal to every cup of flour.  If you're heavy handed and smoosh the flour into your measuring cup you will end up with a different amount of flour than say a person who delicately sifts a cup of flour.  Bill eliminated any kind of discrepancy by using grams for everything in our recipes.  Each group had a food scale (I know I love mine at home, but it had never crossed my mind to use it like this.) and we used it religiously to measure out all our ingredients.

My team was in charge of the White Chocolate Cremeux, with Lime Curd, Coconut Crumble and Rum Whipped Cream.  Each piece of this dessert was made separately.  My team of four (Roger, Mike, Hazel and I) split into teams.  Hazel and Mike worked on the Lime Curd part while Roger and I worked on the Cremeux.  The best way to describe the Cremeux is like the mix between a custard and a pudding.  First we made a custard, and we whipped it into a pudding-ish consistency and added more ingredients.  This leads me back to being amazed with the measurements.  After making the custard portion Roger and I discovered that it had not yielded as much as the recipe said it would.  Because we were cooking with grams we were able to measure how much we had and then easily adjust the rest of the recipe.  For example, we only had 86% of 415g required to go with the rest of the ingredients.  We just adjusted the rest of the ingredients to only be 86% of their grams and went on our way.  If we had been using cups to measure it would have been a complete disaster.  How do you take 14% away from a cup of something accurately?  It was an eye-opening experience. 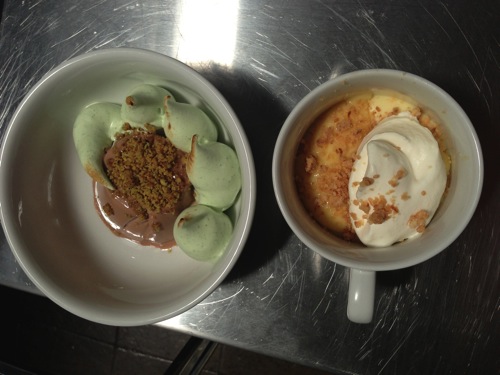 Our desserts came out restaurant ready.  The precision and delicate attention to details paid off and everything was delicious.

I've since been looking for recipes measured out in grams, or ounces, or really almost anything more precise, and it's been quite a challenge.  Bob found an excellent article for me just this morning from The-Magazine.org by Joe Ray, called Weight For It.  It pretty much says the same thing I've said here but it's still a great read.  It also led me to do some further investigating and I've just ordered The Smitten Kitchen Cookbook

and Ideas in Food: Great Recipes and Why They Work

which both contain measurements in grams.  I also went ahead and picked up a copy of On Food and Cooking: The Science and Lore of the Kitchen

because I feel like if I can better understand the chemistry involved in ingredients I will finally be the McGyver of my kitchen. I'm so excited!

I'm also happy to share the chocolate class recipes with anyone, just let me know!