The Other Place and Juicy Berry (Salt Lake City)

Once upon a time my grandparents discovered this restaurant they now frequent once a week, it's called "The Other Place."That's seriously the name of the restaurant.  The Other Place is a Greek/American restaurant and my grandparents go there every Thursday for the navy bean soup, which is pretty good.  My grandmother likes to add lemon juice and pepper to hers, but I think it's pretty good as is.  Anyway, I joined the Thursday night bean soup crowd to catch up on what was going on in the family and hear all the good gossip, and because I too like the bean soup.

I had a side greek salad, a grilled cheese sandwich and a cup of navy bean soup.  The Other Place is very generous with it's feta cheese when it comes to the greek salad, which I love because I <3 (Did you know the Oxford Dictionary now recognizes that symbol as a word?  It does, I'm not making this up.)feta cheese.  If you order a regular sized greek salad it's the best because there isn't any lettuce, it's a real greek salad with only cucumber, tomatoes, onions and kalamata olives and feta.  The side salad has lettuce but I couldn't handle ordering a real greek salad this time around, because I really wanted grilled cheese, mostly to work as a vehicle to get my bean soup into my mouth.  Just like tomato soup goes great with grilled cheese, so does bean soup.  The grilled cheese is nothing fancy, but it's still good.

The other place is nice because the portions are just the right size and the prices aren't crazy, plus my family seems to know everyone who works there so they always have a table waiting.  Yes, we're those people.

After dinner I met up with my friend Jill at this new Frozen Yogurt place at the local mall, the Gateway.  The place is called

Juicy Berry and it's a chain, but it's a wonderful chain.  There are about 10 different flavors of frozen yogurt and everything is self serve, so you get a gigantic cup and fill it up as much as you want, and then head over to the toppings bar.  In the end they charge you based on the weight of your cup.  I tried the pomegranate/wild berry fro yo and the cookies and cream fro yo all covered in sprinkles and oreo pieces.  I give this place a huge thumbs up.  Eat this, it's delicious, and you can have just about anything you could imagine.

My Dad calls some of the places the family always eats at in Salt Lake "Wadsworth Fantasies" because we like the places we've always gone to for years, even though sometimes they're not as good as they should be.  Yet we go back time and time again.  One of these places is "Hire's Big H."

It's just a locally owned burger place, but I can remember eating here every summer when my mom would pack up myself and my sisters to live with my grandparents.  We all almost order exactly the same thing when we go, a double cheeseburger with only mustard and pickles on it.  It's delicious and washed down with a made by hand cherry coke it's exactly the way I always remember it tasting.  It's tradition to go to Hire's, it's just something we do.  Plus, there's fry sauce and I don't know why I like fry sauce, I just do and it doesn't taste as good anywhere else.  It's not better than In-N-Out or even Five Guys but I love it, and will continue to want to visit Hire's ever time I visit Salt Lake.

The prices are average for a burger place, and the staff is really friendly.  Be warned if you go during a peak hour the place is covered in children, this is after all, Zion.

Email ThisBlogThis!Share to TwitterShare to FacebookShare to Pinterest
Labels: American 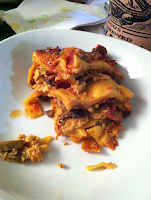 Josie and I made some of this slow cooker vegetarian lasagna this past weekend and it was pretty good. Its main feature would be the pound of crimini mushrooms we put into it, thinly sliced with a mandolin (the instrument, obviously). It took roughly eight hours on the low setting to fully cook into this masterpiece of pasta and delight. The recipe is actually pretty simple:

1. Thinly slice 1 pound of crimini mushrooms and saute them with 2 tsp of minced garlic, salt and pepper to taste. Put this on the side.
2. Cover the bottom of your slow cooker with 1 cup of tomato sauce.
3. Place four lasagna noodles (oven ready) on top of the sauce. You can break it to fit. It may form multiple layers.
4. Place a mix of 1/4 cup parmesan, 1/2 cup shredded mozzarella, 1 cup of ricotta cheese on top and half of the mushrooms.
5. Place four lasagna noodles on top.
6. Pour in 1 cup of tomato sauce.
7. Repeat step 4 (using the rest of the mushrooms).
8. Repeat step 5.
9. Repeat step 6.
10. Place a mix of 1/4 cup parmesan and 1/2 cup of shredded mozzarella on top.
11. Set it for 6-8 hours on Low (3-4 hours on High).

This is what it looks like before it's cooked. Amazingly simple. It actually looks like a lot of rice, but it's just the cheese. Ate this with a nice brown & tan.
at 3:32 PM No comments:

To celebrate my youngest sister's 21st birthday the family went to The Bohemian Brewery.  I'd never been here before as it was a new addition since my actually living in Utah.  Melinda thought it would be a good place to go because she'd heard the food was good, and it's a brewer.

The family piled into the car while it was snowing like crazy outside and headed down to South Jordan from Ogden.  We had planned on being karaoke super stars after dinner but the snow changed our plans, but don't worry we did plenty of other fun things for Melinda's birthday.   But back to the food....

Melinda, Rachel and I all ordered different beers so Melinda could get a taste of the different varieties the Brewery made.  We decided that while we all don't typically like the stouts, the Brewery's stout was their best, the other two were kinda watery and similar to something you'd find at a frat party.

We had a pear, brie, walnut salad with a lemon vinaigrette as part of our appetizers.  I wish there had been more brie or that it had been chopped up into smaller bites, rather than the wedges because there might as well have not been any cheese on that salad.  The walnuts and pears were pretty good though, and the lemon dressing wasn't overpowering but a nice addition.

Now, for my entree.  My father had told me to order the pork chop, but I of course didn't listen to him and instead thought I should try the brawtworst with perogies and sauerkraut.  The perogies were phenomenal, I loved every bite but the sauerkraut was sweet, and the brawt was just kind of bland.  I suppose that the sauerkraut was good, but because I had expected traditional sour/tangy sauerkraut I ended up being disappointed.  I did have a taste of my Dad's pork chop and it was delicious.  I'll know better next time.

The service here was pretty good, although they did seat us in a main traffic area, which was weird because they had other tables that were open that were less in the way.  We were constantly scooting in to avoid the waiters.  Our waitress was really attentive though, and our food came out fast.

The prices seemed a little high, but not unreasonable.  This isn't an everyday place to go, but it's a fun now and again food place.  The building actually looks like a giant cask and that's pretty neat.  I would definitely go back for just the pancakes and perogies.

Email ThisBlogThis!Share to TwitterShare to FacebookShare to Pinterest
Labels: German

Every time I go home the first place I want to go to eat is La Puente.  They have the best smothered burritos, and I've found it hard to actually find smothered burritos outside of Utah.  What is a smothered burrito you ask?  Well the best way to describe it is to say it's like a burrito stuffed with a thinner chili verde with delicious pork chunks in it, and then the same inside is covered over the top of the burrito, "smothering" it.  I like mine with cheese and onions on top as well, and a side of rice.  That along with a Dr. Pepper is the perfect meal.  I think I might like it even more than I like pizza, and I love pizza.

I managed to eat three smothered burritos in the week and a half I was home. The family went to La Puente for dinner my first night home.  There were previously only locations in Salt Lake but the family is delighted the the restaurant has finally expanded and now there's a location in Layton which is just 15 minutes away from our house AND there's another location in Ogden on 12th Street which is only 5 minutes away.  It's pretty exciting.

The family also likes to order a large guacamole salad to go with all our food.  Typically the guac needs some extra salt, but it's really good and they always make it fresh.

The pricing is great, you can get a smothered burrito with rice and beans for $5.99 and it's a ton of food, enough for two meals (because of the rice and beans).

La Puente was also the last place I ate at before leaving Utah.  I really wish I could figure out how to make the sauce because then I'd make my own smothered burritos at home, but I suppose it would never be quite the same.