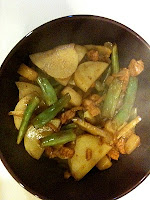 So, again I speak of my love of stir-fry. I couldn't help myself, I blame the blog post I wrote about the last stir-fry. Last night I created a sweet and citrusy concoction that truly was one wok stir-fry awesomeness. And I'm going to tell you how to do it. I shall hence forth refer to it as "Apple Pork Potato Stir-fry," you of course can call it whatever you like when you make it.
This dish is not spicy at all, it's more sweet and tangy/citrusy. Here's what you'll need (and no, I didn't provide quantities because I didn't measure anything, I just threw it in.)
Ingredients:
- pork (cut up in small chunks)
- green beans (although you could probably use broccoli or asparagus)
- potato(es) sliced in very thin slices so they cook easily (I cut my potatoes in half and then slice thin half medallions
- onion (chopped up however you want)
- garlic (coarsely chopped, at least I like it that way)
- apple cut into small cubed pieces
- orange, I pulled it apart and kinda mushed it around in a container
- honey
- soy sauce
- brown sugar
- lemon juice
- butter
- rice (or whatever you want to serve it with, I bet noodles would be good too)
Cooking Implements:
1 wok/or flat frying pan
1 rice cooker/or pot for cooking rice or noodles
Okay, let's begin:
Step 1: As mentioned previously, I like to take care of step 1 around lunch time when I'm in the kitchen anyway.
- Put pork, onion in a zip lock bag. Toss in some brown sugar and then pour in some soy sauce. You don't need a lot of soy sauce, just put in enough soy sauce to mush everything around and get it all covered. Okay, put it in the fridge.
- Cut up your greens and garlic and put them in a container in the fridge.
- Cut up the potato, you could probably also cut the potato into cubes, but I think the slices look nicer and cook more easily. Put the cut up potato in a container and put it in the fridge.
- Cut up your apple and put it in a container. Now, as we all know, after you cut open an apple it starts to get brown and dry out, so to prevent that from happening and to mix some flavor peel your orange and mush up the inside and throw it in the same container as the apple cubes. Now put it in the fridge for later. 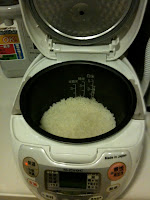 Step 2: (1 hour before you eat, for rice prep and other fun.)
- As taken directly from my last post "Start the rice. I love my rice cooker, if you have one I suggest you use it. If you don't then the easiest thing to do is what my mom taught me. Measure your rice and throw it in a pot with out water in it. Okay now stick your finger in there and note where the rice comes up to on your finger. Okay, now put in enough water that when you put your finger on top of the rice the water goes up to that same mark. (It's roughly twice the amount of water to rice.) Now put a lid on the pot and bring the water to a boil, after it's boiling turn the burner down to just barely on (or a simmer if you will) and put the lid back on and let it sit and cook slowly for 45 to 50 minutes."
- If you're not having rice, I suggest you wait until about 20 minutes before you're ready to eat to start the noodles.
- Set the table. I'm a big believer in eating at the table. Don't get me wrong, I will also eat in front of the tv, but I think eating at table is much nicer. 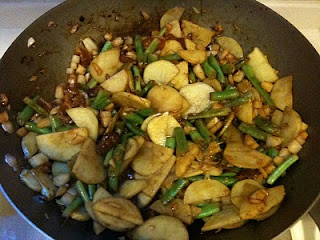 Step 3: Half an hour before dinner.
- Pour some lemon juice in your wok, and throw in about a 1/8th a stick of butter. Throw in your green beans and garlic. Stir them around for a few minutes with the heat way up. (Put the container in the sink.)
- About 5 minutes later put in the potatoes and drizzle some honey over everything and stir it around. (Put that container in the sink.) Turn down the heat and stir everything around for about 10 minutes. You don't have to constantly stir, but you don't want things to burn either.
- Now add your apples and mushed up orange and stir it in real good. (Put the container in the sink.) After you've stirred everything around you can let it sit for a little bit with the burner turned down low. And while it's sitting you can clean up your mess in the sink. Do it.
- Okay, now add all the yumminess from the ziplock bag to the wok and stir it in really well, and turn the heat up to about medium. Stir everything around until the pork is cooked all the way and you're done! 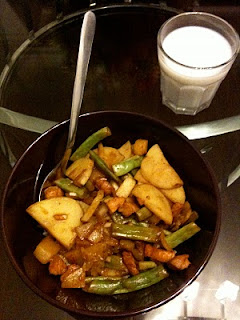 As you can see in the picture above, I enjoyed my stir-fry with a nice glass of coconut milk. Mmmmm, delish.
I think when I make this recipe again I'll add peanuts to it, and maybe try using sweet potatoes instead of regular potatoes. That's the beauty of stir-fry, you can make anything you want.
:)M
at 10:30 PM