I Love Bread Stuffed with Yumminess 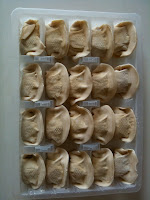 Dumplings, Wantons, XLB (xiaolongbao) and sticky-buns.....mmmmm. I've decided I could eat bread stuffed with yumminess all day every day. I've been on a dumpling kick recently, and when I say dumpling I really just mean anything that's kind of bread-like stuffed with meat, vegetables or some kind of delicious dessert. I've even discovered an awesome brand of frozen wantons and bbq pork buns that are AMAZING. I know because we had them a couple of nights ago for dinner. (That's a picture of what they looked like when I took them out of their wrapping, I just popped them out and tossed them in boiling water for 5 minutes and they were great.)
The frozen wantons we sampled were pork and cabbage wantons and they were pretty good. I like them more than Bob, but he's kind of a snob when it comes to food. I thought they were surprisingly good considering they'd been frozen. They had a really good consistency and were very flavorful. I bought some dark soy sauce to on them, which made them even better. (I have a sneaking suspicion that "dark" just means thick, because this was not your regular soy sauce that pours out of the bottle like water, it oozed out slowly, like pudding.)
Sadly, I don't have any pictures of them, because we ate them immediately but we had....bbq pork buns! And those were GREAT! (Also frozen.) I cooked them in my awesomely new steamer that you can buy multiple levels for so you can steam lots and lots of dumplings and buns at once. You can't really tell in the picture, but there's another layer that sits on top to steam. 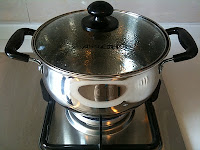 For dessert I even got us small sticky rice balls filled with sesame paste. If you've never had a sesame bun before you are seriously missing out, they are so sweet and delicious. 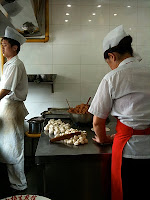 Okay on to other exciting things for instance, today for lunch I had Yang's Fried Dumplings. Oh man are they delicious. They're soup dumplings that are steamed and then fried! Sooooooo delicious and they practically melt in your mouth. I'm not actually sure if you can order different kinds, I just know the ones I always end up with are filled with pork and soup. Yummy!!!! I can get 4 dumplings (and they're pretty big) for 4.5 RMB which is like $0.65 in USD. That's right, for 65 cents I had lunch today and it was great. And you can watch them make the dumplings right before your very eyes, it's pretty impressive. I can't imagine how many they make every day, but I plan on being there on a regular basis to slurp up some fried dumplings of yumminess.
And now, if you will, a side topic: How To Eat A Soup Dumpling
(They're usually super hot, so you don't want to just bite into one, that would hurt, ouch!)
1- Wait a couple of minutes after you've received your dumplings to actually eat them. I know you'll be tempted to bite right in, but remember, they're HOT.
2- Okay, now you've waited for them to get a little cooler. I like to bite a little hole in a corner, or stab it with my chopstick and then suck all the juice out. Mmmm, obviously you still have the chance of soup getting on you, so use one of the nifty spoons usually provided.
3- Dip the yummy dumpling in the vinegar or soy sauce provided on the table to add an extra kick. Today they had some chili pepper sauce which was pretty good.
Half of my yummy lunch dumplings.
(I ate the other two before I remembered to take a picture.) 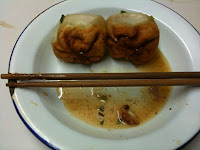 But wait! I'm not done! There's more....
We had dinner at a Xiaolongbao place the other night called "Simon's Test Kitchen." Not very Chinese sounding but you can build your own xlb. You don't actually build it, but you pick the choices. Rather than just having the regular outer shell you could pick shells with spinach, beet, mushroom and regular as choices. And then you can pick what's on the inside, veggies, pork, mushrooms, etc. I had spinach wraps with pork and veggies on the inside, they were pretty yummy but kinda small. I was hoping for something a little more substantial. 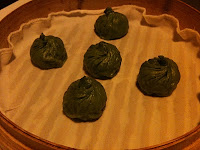 I would go back and try more xlb at Simon's but I'd order a whole lot more food! I got the five dumplings shown above and they were about the size of a tootsie pop. (You know, the how many licks does it take to get to the center of a tootsie pop.) And I'd try all the combos of fillings and wraps. On a side note, Bob tried the fresh veggie juice there and it wasn't very good, it was bland and gooey.
And finally, while I don't have any pictures to show off my favorite dessert, there are plenty you can look up online. I absolutely love taro filled sticky buns. They're soooooo good. It's sweet but not too sweet and usually about the size of my fist, and I love them. I actually had Bob run down to the corner store last night to get one because I NEEDED one. He was really nice and did it for me. :)M
I'd like to apologize for all my pictures being weirdly formatted, again, being in China with the great firewall has caused problems uploading things properly.
at 9:27 PM