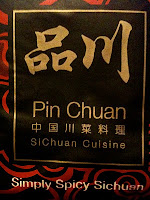 Last night Bob and I were actually going to go to Haiku, a sushi 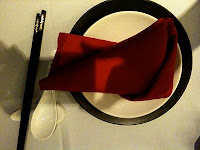 restaurant, but apparently you need to make reservations for the place on a Friday night. We'll know better next time. With out any idea of where we should go, we wandered down the street and ended up at Pin Chuan, whose tagline is "Simply Spicy Sichuan," and we were quite pleased with the meal. To be honest, we didn't know the restaurant was a sichuan place until we sat down and saw the menu, everything outside the restaurant was in Chinese, so we took a chance. I'm glad we did. 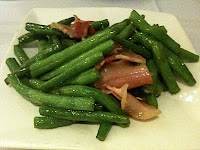 We ordered 4 dishes and shared a dessert. We had pan fried green beans with bacon. The dish wasn't spicy, but it was very good. The green beans were so fresh and were only cooked a little bit, so they had a nice bite. They were a little oily, and we could have done with out that, but they were still very very good and I would recommend the dish to anyone. The bacon was pretty salty, but a nice pairing with the green beans. 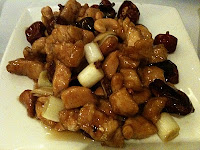 We also ordered a spicy chicken cashew dish that I thought was awesome! It was a spicy/sweet dish and we hadn't expected the sweet part, so Bob was a little disappointed, but I thought it was wonderful. The chicken had been cooked in some kind of spicy vinegar and it was melt in your mouth tender. Plus, I'm a sucker for any kind of dish with cashews in it. 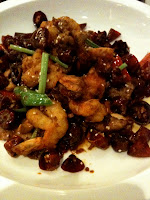 We ordered a spicy beef and prawns dish that was the perfect spiciness. As Bob pointed out to me, we need to be careful when ordering spicy dishes, mostly because if the meat hasn't been specifically mentioned as a part of an animal you usually eat, it's possible that you're eating stomach, which is no bueno. The spice acts as an anti-microbial on dishes like intestine and stomach. Lucky for us, the beef was great and the prawns were even better. I have noticed that the spice they use here leaves a metallic after taste in my mouth. I asked Bob about it but he hasn't noticed any such thing, so it must just be me. 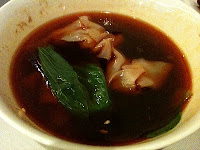 We had shrimp dumplings in a spicy chili sauce, but they were only "eh." They didn't really have a lot of flavor and were pretty greasy. I wouldn't order them again, they didn't bring anything special to the meal. 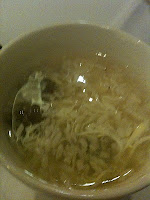 Lastly we ordered sesame balls in egg/vinegar/sugar sauce/soup thing, called glutinous rice dumplings. The sesame balls were great! That's definitely something I'll miss when we eventually leave China, sesame is soooo good. Bob just told me the sesame balls are made with sesame paste, sugar and lard. No wonder they're so good. 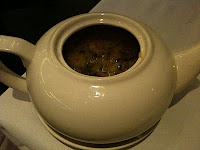 I would definitely recommend Pin Chuan, it was great and the price was great. We enjoyed our dinner with the local beer and Chrysanthemum tea. They actually crush up the flowers and throw it in the tea pot, it's kind of perfumy but it was a really good compliment to the food.We had all that food plus Chrysanthemum Tea and three beers for about $55USD. I think we'll probably take our friend Richard there while he's staying with us.
After we finished dinner we walked around the French Concession and stopped at a bar with an outside patio. We enjoyed a beer there and then walked on to find another place. We ended up at a bar called the Bulldog Pub. It was 4 stories tall! They had a pool, boardgames and drink specials, so we hung out there for the rest of the even. We'll likely go back to check out their 2 for 1 burger deal that they have on Friday nights. :)M
at 2:48 AM