Snacks - They're awesome! (In Shanghai)

"NomNomNomNomNom" (That's the noise I make sitting at my desk all day.)

I'm a big snacker, and it's been a little difficult trying to figure out snacks while in China. Mostly difficult because I don't always want a sweet snack covered in some kind of pork product, which seems to be fairly common. I have found a few things I really enjoy though, and of course they're sweet and I don't need to eat them, but I still do. 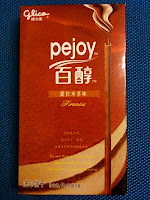 SNACKS!!!!
1- Pejoy - I love Pejoy, it's like Pocky but instead of a long stick pretzel covered in chocolate or whatever you like, it's a hollow pretzel/waffer thing filled with different kinds of wonderful creamy insides. I've managed to find: matcha (green tea), chocolate, vanilla, strawberry, cheesecake, tiramisu, chocolate/vanilla combo and a wine flavored one which I haven't tried just because it looks gross. The Tiramisu one is by far the best because it's like a really sweet coffee. Mmmmmm. Each box of Pejoy comes with two little packets of about 8 sticks. They're delicious and I can't help but eat a whole box by myself sometimes. 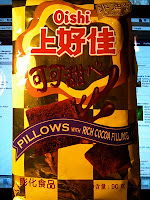 2- Pillow - OMG! I don't even really know what these things are, but I love them. They come in three flavors (that I've found so far, there could be more) Taro, Red Bean and Chocolate. Taro and Chocolate are my favorite, the Red Bean is okay, but not as addictive. They're about the size as mini-wheats cereal and they have a Captin' Crunch consistency, and are filled with one of the three flavors. The Taro Pillows actually taste like Captin' Crunch on the outside and then have the yumm
y Taro flavor on the inside. The Chocolate ones are like Coco Puffs on the outside with a Chocolate center. The Red Bean Pillows are less flavorful and kinda wheaty on the outside, red bean "eh" okay on the inside. Bob and I particularly enjoy the Pillows on top of ice cream, it's amazing. 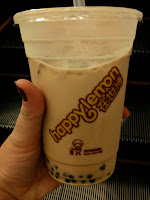 3- Milk Tea -This is not my first experience with Milk Tea, I've been enjoying it since about Spring Break of 2003 when I road tripped to the OC with my friend Kelsea. She introduced me to the drink as (phonetically) "Bow-ba." It's a drink/slushee/icee/ usually with tapioca balls the size of your thumb in it. You drink it through a large straw to suck up the balls of tapioca. At first it's a little weird to be chewing your drink, but I've come to love it soooo much. Anyway, here it's a milk tea, mostly because if you order a regular milk tea, it's a milky consistency and it's got kind of a soy milk sweet taste with the tapioca balls. You can also get (again, phonetically) "say-go" which is a smaller version of tapioca balls. There are also different kinds of flavors you can get. It seems like there are typically 4 different kinds of the "Bubble Tea" (another name for them, because of the Pearls, aka tapioca balls), juicy, dessert, coffee, and strangely enough salty. The regular milk tea falls into the coffee category. I usually get a coffee based milk tea or a dessert milk tea. Back in the US though I'm a fan of the Avacado Slurpee-esque Bubble Tea from a place called "Quickly." Yum! Here my favorite is a chain called "Happy Lemon." I usually pick up a milk tea whenever I'm at the mall, it's a ritual. 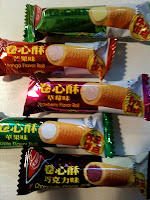 4- Flavor Rolls - Sorta in the same line of thinking as Pejoy, these are about the size of your thumb, waffers filled with different kinds of cream. I picked up a bunch just the other day at a grocery store. I bought 16 for less than $1USD. So far I've only tried butter(vanilla) and chocolate but I must say they're pretty decent and it's nice that they're individually wrapped. I also picked up: strawberry, pineapple, mango and apple, so we'll have to see if I like those as well. I would say they're like those little waffers you can buy in the states with the cream in them. I can never remember what they're called but I promise, these taste about the same, just with more variety. 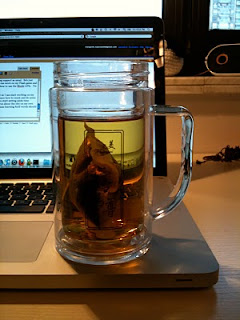 5- Tea - What kind of person would I be if I were living in China and not drinking mass quantities of hot tea? A bad person, that's right. Right now we have three different kinds of teas in our house and every morning I wake up, I wash out my mug and throw in a new bag of tea and I just re-fill my cup all day long. Yes, the tea bag lasts that long, it's truly amazing. We currently have your basic Green Tea, Oolong Tea and another kind that I cannot remember the name of for the life of me. Our friend Eric picked it up for me because I told him how much I love the tea we get whenever we go out to restaurants. So I guess it's just basic Dinner Tea. Bob and I bought special mugs that are like mason jars with handles. This way he can take his tea with him in the morning to work. The mugs also came with a little siv thing for loose leaf tea, which is pretty nice.
I'll continue to check out snacks and report back. In the time I wrote this I ate an entire bag of Taro Pillows. They were delicious. :)M
at 2:44 AM