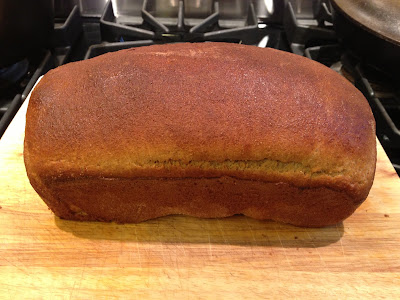 I decided to try my hand at making homemade bread.  Of course being me, I couldn't make just regular bread.  I chose cinnamon wheat bread because whenever I buy it at the store it has raisins in it, and there's never enough cinnamon.  Because I've never made bread I looked up a recipe, but then of course I used it as a guideline and adjusted as I saw fit.  I used The Pioneer Woman's Homemade Cinnamon Bread.

The alterations I made were:

I should also mention that I don't have a bread maker, so I made my bread entirely by hand - well my kitchen aid mixer did make an appearance.  It was a long endeavor.  I now have seriously respect for people who regularly bake their own bread - especially with out a bread making machine.  The whole process took forever, this is not a quick pay-off recipe.  I didn't get any pictures during the whole process because I was covered in nastiness for most of the cooking experience, but my finished pictures make me very happy. 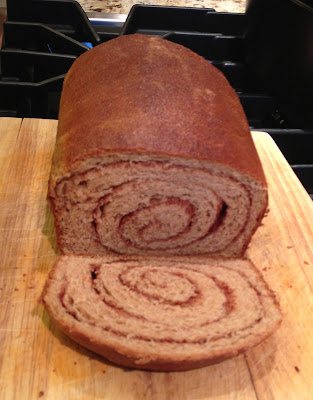 My loaf of bread sliced open for delicious eating.

You can't tell very well but I didn't roll my bread tight enough so it didn't quite hold together in some places.  I think I'd also use half wheat flour and half regular flour to make the bread a little less dense.  Otherwise I was pretty damn pleased with myself.

This morning for breakfast I used the bread to make french toast!  It was delicious! 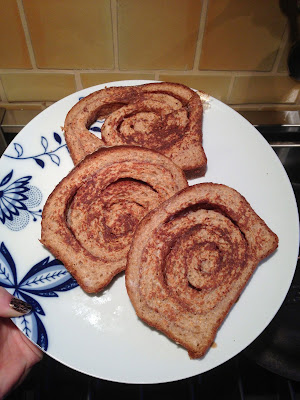 I think everyone should try baking bread at least once just to understand how ridiculously long the process takes.

Now go forth you baking fools, and create your own deliciousness!!