I was a really busy girl this last week.  As of today I've made three more cupcakes from the Robicelli's cupcake book.  I'm gaining headway with my personal cooking challenge.  I started the week off with the: 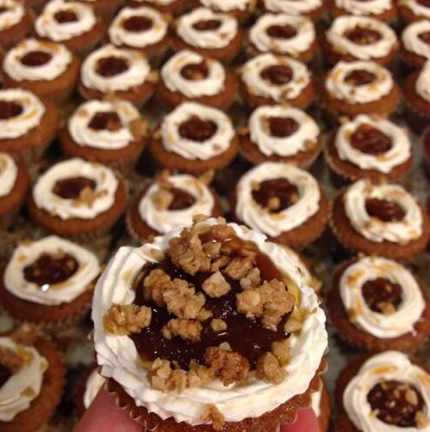 OMG, this cupcake was amazingly moist and delicious.  Even though it's one of the easier recipes it was a bit time consuming because of all the components.  I made my own apple butter and oatmeal crumble this cupcake.  I bought 5 pounds of Pink Lady apples to make my apple butter, and to shred to put in the cupcakes.  (Pink Ladies are my go-to baking apples.)  I had to plan in advance on this recipe because the apple butter takes 9-12 hours.  I threw in a little extra cinnamon because nobody hates that.  The cupcakes turned out great, sweet but not too sweet and the apple butter was absolutely amazing.  The best part is that the cupcake is "finished" with Maple syrup.  Soooo delicious. 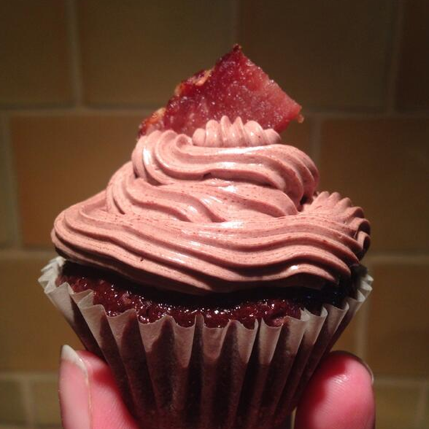 Then I made "The Maltz" for our friend's "House Concert."  (It's a really San Francisco thing to do.  They opened up their home to a couple of musicians and had a little potluck and concert in the living room.)  One of these friends really likes bourbon and bacon so The Maltz was the obvious choice as it's a chocolate coffee bourbon cupcakes with chocolate bourbon buttercream and topped with candied bacon.  I added about a shot worth of extra bourbon to the frosting and instead of brown sugar I used maple syrup to candy the bacon.  It was heavenly.  I have noticed that all the chocolate cupcakes seem to be more dense and dry than the other cupcakes - I'll have to compare the recipes side by side to figure this out. 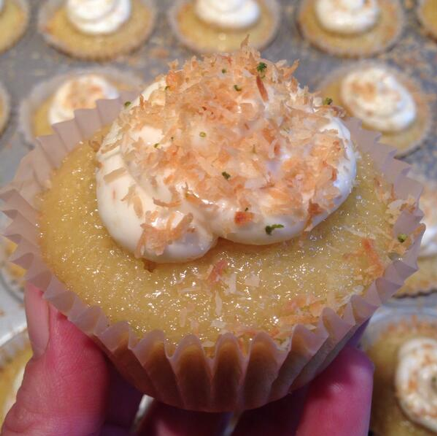 And lastly, today I made "The Coquito."  It's a coconut rum cupcake with coconut lime buttercream and topped with toasted coconut.  There's also a coconut milk and sweetened condensed milk "bath," for the cupcakes.  After the cupcakes came out of the oven I stabbed them a couple of times with a fork and then poured the "bath" over the top of them and let it soak in - it's the perfect amount of sweet.  I think I'd consider adding more rum in the future, and maybe some actual lime juice in the buttercream, but they're really good.

Overall it has been a successful cupcake week.