Oegadgib (Don't ask me how to say it) Korean BBQ 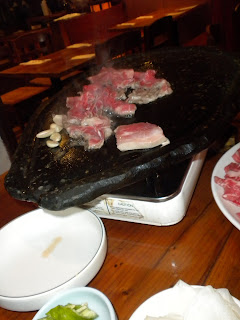 On Saturday, I was terribly hung over and in need of something substantial to cure what ailed me. I convinced a friend to let me introduce him to Korean food so we drove out to Annandale for lunch. Annandale is basically the Koreatown here in the DC metro area and there are Korean restaurants, groceries, noraebangs (karaoke rooms), and shops. I love Korean food but it's a bit of a drive for me and I loathe the Virginia suburbs, so seldom do I get out there. Anyway, when you arrive at Oegadgib, don't be deterred by the surroundings. An observant person might notice that there's a veterinary clinic right next door and a meat market in front of the restaurant. I'm just saying...

Well, once you enter the restaurant, you are greeted by the smell of grilling meat, garlic, and chilis. Here comes the first challenge. I'm not convinced the waitstaff speak English. If you've never had Korean food, you might have a challenge here, but if you are up for an adventure you'll be fine. The menu is in English and Korean, but sometimes it doesn't really explain what you are ordering. We did the point and nod thing and made sure to smile and be polite and everything worked out. Your best bet is to order the all-you-can-eat bbq. For $16.99 you get a plate with three meats--two cuts of beef and pork belly. In addition to the meat, you get an endless supply of banchan, which are the various side dishes commonly served in Korean restaurants. There was the typical cabbage kimchee, bean sprouts, spinach, sliced radishes, some chewy little things that looked like translucent crinkle cut fries but were probably made with seaweed, and of course we had two soups. 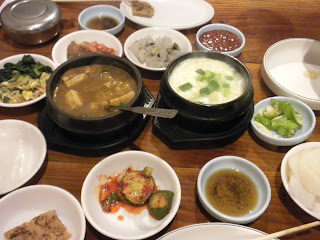 The doenjjang jigae, or fermented soy bean stew, was perfect. Pungent, spicy, piping hot and filled with big chunks of tofu and a hearty serving of potatoes and zucchini. My friend was scared of the egg soufflé but his fears were quickly allayed after he had a taste. Well, first he burned himself on the steaming fluffy egg mixture, but then he fell in love. What do they put in there? It seems like only egg but there’s got to be something else to make it taste so good.

On to the meats…. I’m a big fan of samgyupsal, or pork belly. But this time it seemed like the cut was too thick. The meat took forever to cook and was tough and chewy. We left a few slices of that on the plate. The best had to be the thinly sliced beef. Dip it in a little bit of the pepper sauce for a sweet and spicy kick or the sesame oil dip if you like salty and earthy flavors. For me, it was all about the gochujjang (pepper sauce). Although this place is all you can eat, with only two of us we were struggling to get through the original plate they served us. But we are troopers, and southern to boot, so there would be no wasted food! We polished off the meat, most of the soup and egg soufflé, and the better part of all the side dishes. It seemed like such a good idea at the time, but 10 hours later when the taste of garlic still lingered in every breath I took and I couldn’t even think of having dinner, I realized maybe I shouldn’t have eaten a pound of meat and several raw garlic cloves. It did, however, go a long way to curing my hangover.

Email ThisBlogThis!Share to TwitterShare to FacebookShare to Pinterest
Labels: all the meats, asian, bbq