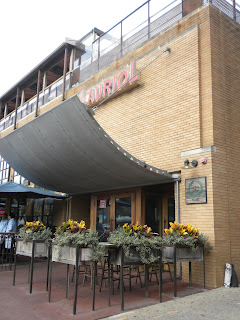 Apparently, Margaret and I are now competing for most blog posts. It's quality, not quantity I say! Well, I at least have to do my part to keep up. So tonight, I joined my pal Gail who has been having a hellish week at work at Lauriol Plaza for a margarita, some Mexican food, and a chat. Lauriol never disappoints, but it fills up quickly after work. Luckily, I was "sick" today, cough cough, and left work early, so I was on a bar stool waiting at 5:15. I was flying solo for a bit and didn't want to seem like a weirdo, so I ordered a margarita to blend in. Lauriol has several flavors of margarita but you can't go wrong with the classic blended. Several people were also ordering the swirl, which is regular and strawberry mixed together. Also a good choice. So by the time Gail shows up, I'm done with the better part of my drink and feeling quite chatty. So we asked for a table and went up to the rooftop bar.

It was nice on the roof for, oh, about 30 seconds and then it began to rain. Although we had a roof, the sides were open and the rain started coming in, but I just thought, oh screw it, let’s drink, errr, eat. We started with the obligatory chips and salsa. Here’s where I’ve got serious beef with Lauriol and its sister restaurant Cactus Cantina. Their salsa sucks. I mean, it’s horrible. I have a very low bar for judging salsa, I’ll even eat Old El Paso and relish it. I don’t know what they are doing to this stuff. It’s watery and drips off the chips onto the table, onto the menu, and onto your shirt. I can’t figure out what’s in it. I think they grill the veggies before pureeing them. I eat it every time hoping it’s good, but I’m always underwhelmed. And underwhelmed is being generous. Anyway, their chips are fantastic—housemade, light crispy and warm. They are great on their own or with some of the house guacamole which is also fresh and worth the $5.50 they charge you for a small bowl of it. 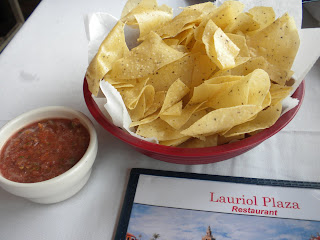 The salsa is really my only complaint. Usually when I go with other friends we have a routine. We split the beef fajitas and an order of tamales, but today I had to branch out. I went with the Cantina Superior combination which came with tacos carbon, a cheese chili relleno, a chicken enchilada, and a chicken tamale. Yes, it is a lot of food, and no, I am not ashamed. I like variety, and why not sample all they have. How was it? 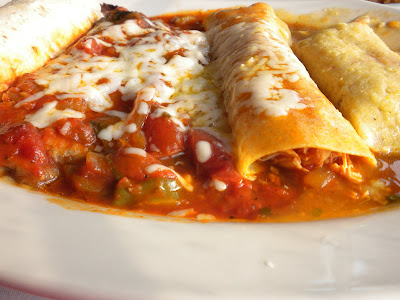 Well, the tacos carbon was amazing. It’s the same high quality ribeye they use in their fajitas just rolled up in one of the freshly made flour tortillas. I’ve heard that they won’t serve the tortillas if it’s been more than six minutes after they came out of the oven. I’d believe it as they are delicious little fluffy pillows that gently caress your meat. Or something like that. The chicken tamale was just ok, especially considering how great the pork tamale is. Then again, pork is always better than chicken. The chicken enchilada was great with ample chicken spilling out and a tangy red sauce over the top. I’m not a huge fan of chili relleno. I want to love it. I mean, what’s not to like. Cheese, chili pepper, onions, all battered and fried with more cheese over the top? How can that be bad? Well, I usually find the batter has gotten soggy and falls off and the cheese is overwhelming. It wasn’t bad but I won’t be writing home about it. All in all, it was a satisfying plate and there was probably half of it left by the time I could no longer breathe with my pants still buttoned.

On a completely different subject, I’m working on a brunch idea. I’ve got something cooking. Basically a friend and I are trying to trick a (straight) male friend into joining us for brunch. Little does he know this brunch will be at Perry’s, which is known for its drag queen brunch. I think it will be a nice surprise for him. This is in addition to next week’s drag queen bingo which we are billing as trivia night. Hey, I’m just trying to open minds and expand horizons, and if I can throw some food into the mix, even better!

Email ThisBlogThis!Share to TwitterShare to FacebookShare to Pinterest
Labels: mexican