Oh man, it's been a while since I've updated you on my personal cooking challenge.  I've baked 9 new flavors from the Robicelli's Cupcake book!  That's 33 of 50 cupcake recipes so far, and I'm really pumped to tell you all about "El Melocoton de la Muerte" because it's definitely my favorite so far.

Let's get this show on the road! 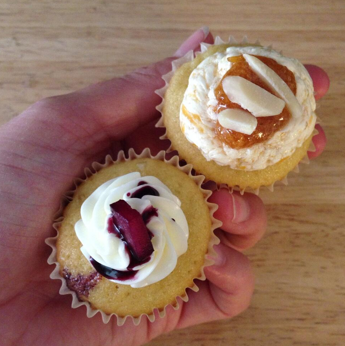 So, I wasn't blown away by either of these cupcakes.  They were good not great.  I didn't feel like the peach flavor really came through in cupcakes.  The soaked peaches in red wine were pretty good on their own, and the peach compote was really nice.  I added slivered almonds to The Rue McClanahan because I felt like it needed something. 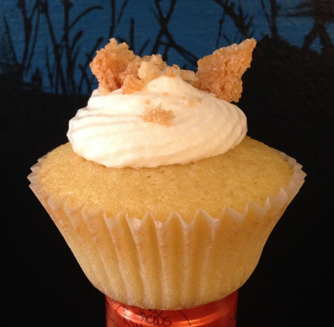 It's worth making this recipe just to have extra amaretti cookies around your house.  Super delicious, and if you happen to have any gluten-free friends these cookies will delight them beyond belief.  Serious, make this cupcake.   I added some amaretto to the buttercream as well just because I like my cupcakes extra boozy. 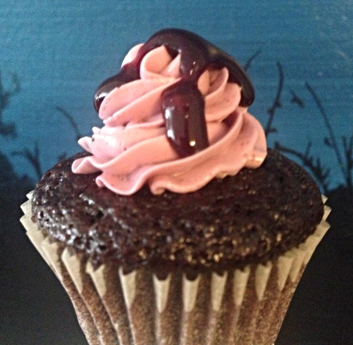 My husband says these are the best "fridge to mouth" cupcakes so far.  In other words you can take one of these bad boys right out of the refrigerator and it tastes perfect.  I typically like to let my cupcakes come to room temperature before eating them, but these were perfection whether cold or room temp.  I pureed the Blackberry Cabernet Compote and added it into the cake batter, and found it was easier to use in the frosting and as a syrup in that form. 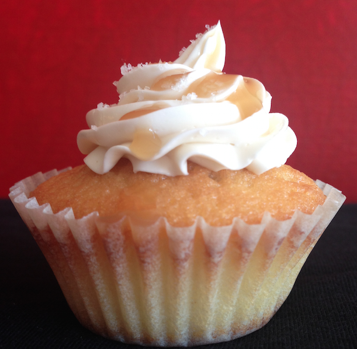 YUMMMY!  Did you know the difference between butterscotch and caramel is brown sugar vs white sugar?  Yup, it's true.  I added a bit more salt, and bourbon to the butterscotch.  I also topped the final product with some extra salt. 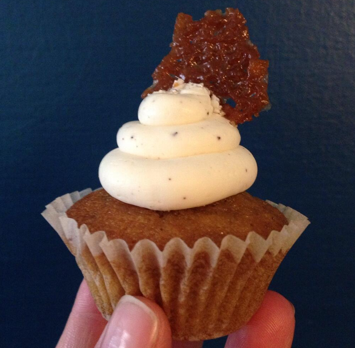 This is another recipe that's worth making if only for the Brandy Snap cookies.  Man, those are good.  I had so much leftover that we just crumbled it up and ate it by the handful.  This is a fairly refreshing cupcake, light, buttery and not too sweet. 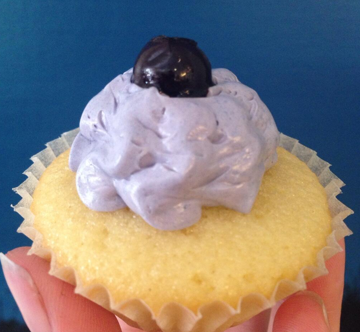 The blueberries from this recipe were sooooo good after being soaked/cooked in port.  I actually used the remainder blueberries to make some faux butter cream for a vegan cupcake later in the week.  I pureed the blueberries and whipped them in with the faux-cream.  I added a bit of uncooked port to the frosting for an extra boozy finish. 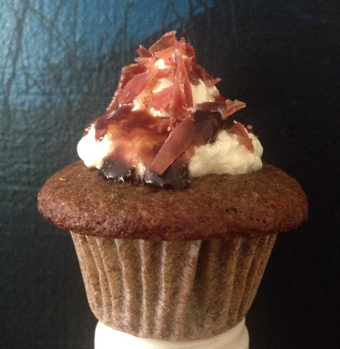 I seriously just finished baking these bad boys an hour ago.  The cake is super moist and delicate.  This is definitely a more savory cupcake but still hits the spot.  Forget having a cheese plate, this is the way to go for my next party.  I ended up having to strain out some big clumps of fig jam from my gastrique (syrup/sauce) as the jam just wouldn't finish dissolving. 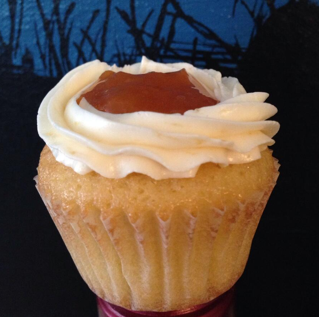 I waited and waited for peach season just to make this cupcake!  My husband and I love spice!  The more spice the better.  We already had ghost chiles at the house, and the ghost chile powder so we knew this recipe was going to be right up our alley.  The compote is to die for!  I made an extra large batch and we ended up using it as a marinade for pork chops, soooo yummy.  I followed the directions to the letter on this recipe because I didn't want to burn anyone's face off.  It was the perfect amount of spice.  Everyone who tried it loved it!  BEST CUPCAKE EVER!!!!!  I'm going to make more of the compote and freeze it so I can continue to enjoy it's fiery awesomeness.

Whew, now we're all caught up!  I plan on making two different kinds of cupcakes this next weekend so keep your eyes peeled for deliciousness!